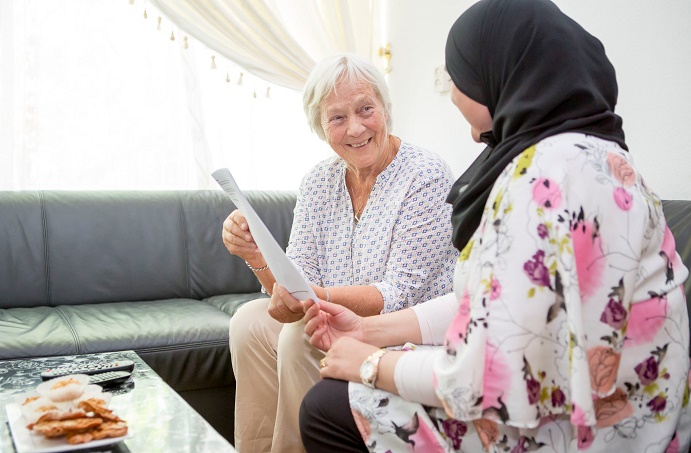 Self-reliant through language lessons at home

Develop your self-reliance through language mentoring at home

“We clicked right away”, the ABC-volunteer Mariëlle says enthusiastically. Farida agrees laughingly. She is an intelligent woman, who wants to learn Dutch. In Morocco, she only completed primary education. She doesn’t know many people in the Netherlands. All her family live in Morocco. Through the Amsterdam Buurvrouwen Contact, (ABC brings women from different ethnicities and backgrounds together in a secure and friendly environment, she has found a language mentor who teaches her Dutch at home.

Farida must integrate. She came to the Netherlands a year ago with her three children. Her husband had been living in the Netherlands for a long time. Farida did not know anyone when she arrived. When she first attended Dutch group lessons, she did not dare to speak. She suffered from panic attacks. Now that she gets language lessons at home, personal attention helps her to learn more effectively.

As a language mentor at the ABC you don’t only teach the language, Mariëlle explains. Every tenth lesson includes an outdoor activity when we either visit the neighborhood together, go to the library or a community center. Farida knows now where she can go if she needs further education.

A language mentor should know what goals one is setting for themselves, Mariëlle explains. Individual motivation helps people to deal with the difficulties they encounter in the process of learning a new language. After all, Dutch is a difficult language to learn. It is very fulfilling to help Farida achieve her goal.  And if she feels good, I am feeling good as well. My work is done. Self-reliance, that’s what it’s all about.

“My dream is to work in the care sector”.

“My children speak Dutch very well,” Farida tells me proudly. “I want to be able to read to them in Dutch. Or help them with their homework. My dream is to work in the care sector. To achieve that, I need to take a course. Then I will have to learn even more!” she says laughingly.

“I registered with the ABC, because they enable you to come to mentee’s house,” Mariëlle says. “And that is very special. We don’t live in the same neighborhood, Mariëlle says, “so we are not really neighbours.” Farida lives in Amsterdam North and I live in Amsterdam South, but with the North-South line I am there in no time at all.”

I have an administrative job and voluntary work beside it.  It makes a lot of sense to do it. It is also an enrichment to know Farida. We learn so much from each other! The other day she said something in Dutch, which I could not quite understand. It turned out to be a literal translation of a beautiful proverb in her mother tongue. I am getting to know another culture and the wisdom Farida possesses! Yes, I am very happy with Farida.”

“And I am very happy with you!” Farida concludes.

The ABC is there for a special target group: socially isolated women, who benefit from individual language mentoring at home. Farida had no network when she came to Amsterdam and was housebound because of her children. In addition, she struggled with her fear of failure. Now, after a year of mentoring, she will soon be able to take the civic integration exam.

Would you like to have a language mentor just like Mariëlle? Find an organization and get in touch. You will find The Amsterdams Buurvrouwen Contact among them. 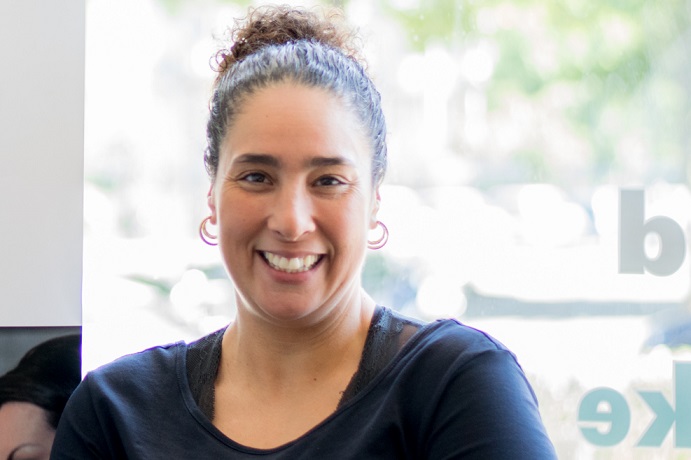 Rachida el Kaid (38) lives with her son Chakir (8) in Buitenveldert. Since December 2015, she has been volunteering as a Dutch language mentor at the 4People Foundation, where she meets non-Dutch speakers on a regular one-to-one basis, in order to improve their Dutch. She does this no less than three times a week. “I like to make myself useful.”

Cheerful, open minded and easy to deal with. That’s Rachida. A happy smile often appears on her face as she talks. She has a passion for reading, cooking and, of course, for her son Chakir. “I think it’s important to set a good example for him. To teach him how valuable it is to do something good for someone else. He will follow my example when he grows up!”

“For many people whom I am mentoring, it is difficult to start speaking Dutch at first, as they often don’t dare to speak a foreign language. They feel insecure and isolated in their everyday life. For example, there is this Turkish lady, who at first dared not to say a word. I was literally pulling the words out of her mouth. But now, a few months later, she seems to be blossoming! She has overcome her fear of speaking a foreign language, partly because of our mentoring sessions. She can’t speak Dutch perfectly, but she can speak Dutch!!  I can understand everything she is saying. “That’s so wonderful and rewarding.” Rachida says proudly.

“I supervise nine people, all of whom I meet once a week, one-to-one. And then we talk about the events in recent weeks, about their holiday plans and their family. Sometimes we do a simple role-play, to stimulate practicing phrases used in everyday situations. For example, we create a situation where they must call the doctor’s surgery and act out a dialogue. O, we read from a children’s book together.”

“Through my voluntary work, I have learned not to judge other people. There is a special story behind every person.”

Meeting all these different people from different cultures is absolutely great! I bond with each of my mentees. After a while, they tell me personal things about themselves. Behind every person, lies a special story.  I have also learned to have even more respect for people in general. Not to judge immediately. Because so often we don’t know what’s beneath the surface. ”

Rachida has previously worked with children with learning disabilities. Due to circumstances, she became unemployed in 2006. “Sitting at home for a long time without having a job was hard for me, every day was the same. Whereas I like to be active, want to make myself useful, interact with people. That’s why I’m very happy to have found this volunteering opportunity.”

“Before I started, I ‘d had a six-day basic training. The topics discussed included: How do you create a pleasant, safe atmosphere in a conversation? How do you deal with someone with a negative attitude? What do you do when someone comes to you with a problem? Useful themes, with plenty of helpful advice.  As a result, I have gained additional knowledge and skills to work confidently as a language mentor.”

“To help people improve their Dutch language in this way, makes me so happy!”

“To talk to someone every week for an hour and a half, is only a small effort for me, but for them it’s often something very big and very important. They practice their Dutch, learn things about their new country, overcome their fears and build self-esteem. “It’s really because of you, Rachida; you are so sweet and so patient,” a woman said to me the other day, as she thrust a box of Lithuanian chocolate in my hands. Of course, I do not expect any gifts, but I just want to help people improve their Dutch in a relaxed and friendly way and empower them. And that makes me so happy!”

For Dutch speakers, language coaching is an opportunity to get acquainted with other cultures. An informal talk at the kitchen table, while cooking or on the way to a museum or to the market. How and when you want to do is, is entirely up to you and your mentee to agree upon.  Find an organization that suits you and sign up.

Would you like to speak Dutch better? A language mentor can help you improve your language skills. You will meet for a few hours a week. You will speak Dutch together, so that you can put into practice what you have learned in a language course. Find an organization that suits you and sign up.